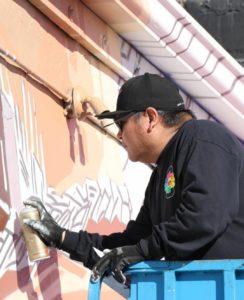 JayCee Beyale grew up in the Four Corners area of New Mexico, and received his BFA in printmaking from the University of New Mexico. He currently resides in Westminster, but travels often participates in collaborative murals and other art projects with fellow organizations and artists. JayCee’s connection to his aboriginal culture is heavily influenced by his involvement in the arts; his personal identity and background have always been present in his work because he is proud of who he is and where he comes from. His career as an artist started when he discovered street art and graffiti. He is deeply influenced by music, and is certain that without music, his art would not exist. Combining traditional indigenous ideologies and his personal Buddhist practice, JayCee is always striving to emphasize the concepts and convictions in his art. Using a combination of spray paints and acrylics, he hopes to share his beliefs by celebrating the fusion of technology and Indigenous culture in his work. JayCee aspires to illustrate the Laws of Movement, Unity and Impermanence in his work.