In honor of Indigenous People’s Day, and as an acknowledgment to the land that The Dairy sits on, we have partnered with Street Wise Boulder as a wall sponsor and are so excited to welcome muralist LMNOPI (or “Lopi” for short) from Vermont/NYC. Lopi painted a portrait-based mural on the west-facing side of the building located in our main parking lot titled Uncounted on October of 2019. 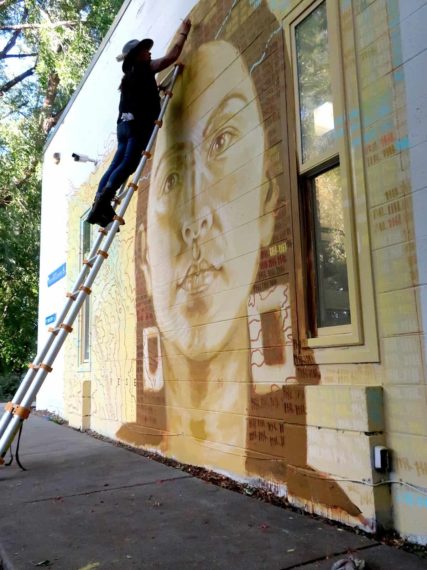 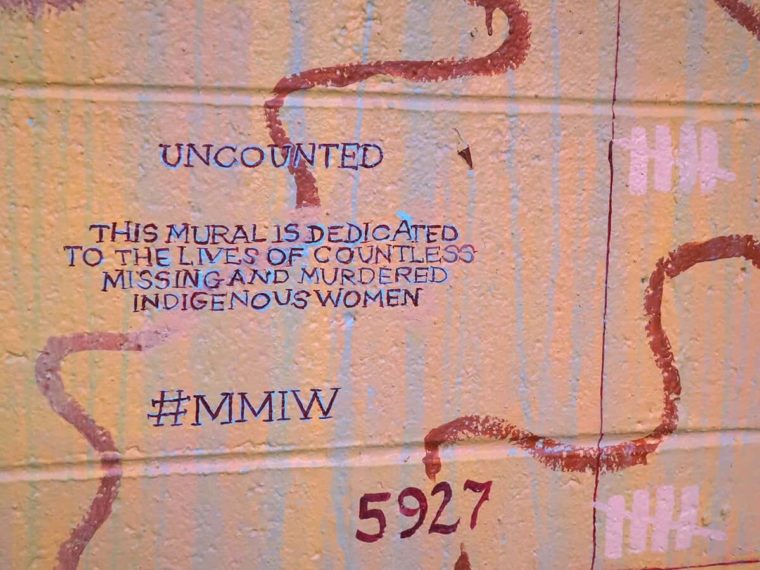 Featuring Arapaho Shoshone artist, actor and activist Sarah Ortegon over a topographical map of the Wind River Reservation in Wyoming, this mural was created as a way to amplify the epidemic of violence against contemporary Native Women and Girls.

The fossil fuel industry is directly implicated in this epidemic of violence. When they build pipelines in close proximity to Indigenous communities they put Native women and girls at risk of being raped, abducted and murdered by the pipeline workers who are imported and housed in man camps. A critical look at rape culture must include the larger picture of the treatment of the planet herself. Extractive industries treat the planet as something to exploit. Similarly, women are seen as objects to extract pleasure from. Desecrating the earth leads to desecrating women. We are one and the same. Elements of topographical maps highlight the interconnectedness of the human body with the planet. The elevation lines used in cartography echo the mark making used to describe the human body in two dimensional form. One could perceive maps as mankind’s attempt to subjugate the land and as such it provides a curious juxtaposition with activists breaking free from the confines of borders and colonization. Much as the topographical lines in this mural are breaking free from the confines of the boundaries of the pictorial plane. The figure herself refuses to be contained by the rectangular frame of the mural. She is bigger than that. Like a mountain she rises above.

When I began researching this issue in order to inform my creative process, I tried to look up the statistics on the epidemic of violence being perpetrated against native women and girls. I was shocked and dismayed to discover that there are no accurate statistics because of the simple fact that the police and government agencies responsible for solving these cases don’t keep track. They don’t count them. One can easily conclude that it follows that they don’t feel that these women count or matter enough to keep track of. I decided to include hash marks used for counting in the mural. If you look closely, you will see them covering much of the mural. Some are being obscured and some are disappearing altogether behind the map. This is a literal metaphor. I have left some empty spaces as well. These empty spaces are asking the question: how many more? How many more will go missing and be lost to the world; to their children; their partners; their parents and brothers and sisters and friends. How many voices will be silenced; how many more gifts will be lost. 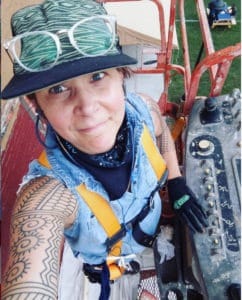 LMNOPI has been a community organizer, humanitarian worker & civilly disobedient activist over the last four decades, standing elbow to elbow with the people & communities she depicts in her work. She is a traditionally trained painter & printmaker dedicated to street art activism. Her skillful brushwork & signature palette lend her works of art an unmistakable timbre. A terrain of strength and humor, defiance and resilience, love and bravery emanate from the faces of the women and children she paints.

Former projects include Earth First in the late 1980’s where she worked on the campaign to save Head-waters Forest in Northern California. She was the founding director of a community arts venue called What is Art? in Santa Cruz 1994-2000 serving as the curator and facilitator there until she moved to NYC on September 11th, 2001 first attending the School for Film and Television and then making an official return to academia which culminated in graduating cum laude from SUNY Purchase with a degree in painting and printmaking in 2005. She was awarded residencies at both the Lower East Side and the Robert Blackburn Printshops in Manhattan. In 2009 she invented the street artist persona LMNOPI as a way to protect her identity while roaming the streets of Brooklyn making unsanctioned interventions on abandoned store fronts, buildings and construction sites.

She was an active participant during the occupation of Zuccotti Park in NYC in 2011, created viral memes for the anti-fracking movement, was one of the founders of the disaster relief effort Occupy Sandy in 2012 in NYC, which mobilized thousands of volunteers in the wake of the devastation of Hurricane Sandy. She took part in the fight against the Dakota Access Pipeline by camping for two months at Standing Rock in the winter of 2016, playing a supportive role for the elders & Indigenous leaders there.

Two archives of Lmnopi’s work were acquired by the prestigious Thomas J. Dodd Research Center at the University of Connecticut in the summer of 2017. Her work was added to the archives of Reed College, Stanford, University of Pittsburgh, UC Berkeley and St. Olaf University in 2018. Her print work is part of a historical archive of Occupy artists titled Occuprint which is in the collections of many distinguished universities, museums & libraries such as Harvard University Art Library, University of Applied Arts Vienna, Library of Congress and the Museum of Modern Art. Her public works can be found on the streets of cities across the United States, Mexico, Canada & Haiti.

LMNOPI relocated to the Green Mountains of Vermont in the Fall of 2018 and she continues to amplify voices deeply rooted within the Economic, Social & Climate Justice Movements. She remains a dedicated and stalwart accomplice to the leaders of Indigenous and Youth led activations.