We Are What We Wear 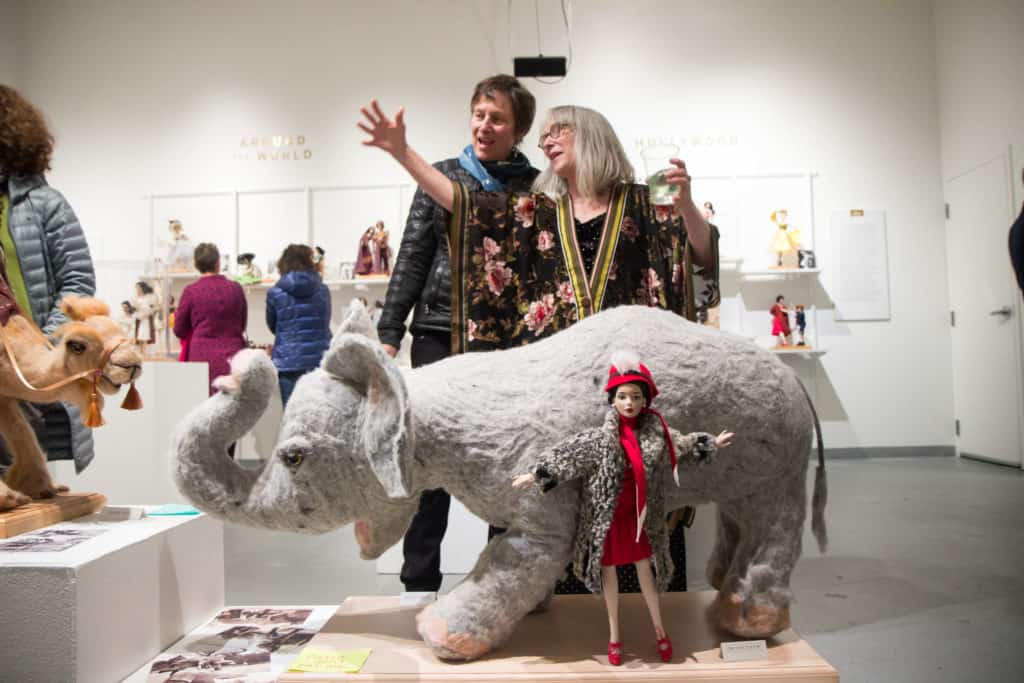 We Are What We Wear presents a limited survey of contemporary artists across the United States working with clothing as a form of artistic medium. Textiles, whether created or repurposed, hold physical, historical, as well as emotional weight. The smell from oil-stained cloth that permeates your grandfather’s closet and the floral perfume wafting off a freshly sprayed feather boa brings you back to a moment of connection, a certain place, or creates a nostalgic ping of longing for a time you used to know.

Using materials as sprawling as rust, kevlar, denim, and glass beads, the artists in this exhibition all question personal affinities through the exploration of clothing and the people who wear it. Presented primarily through sculptural work, We Are What We Wear displays itself as an exhibition for the community of Boulder; a starting point for extended conversation surrounding labor, passion, safety, and masculinity. 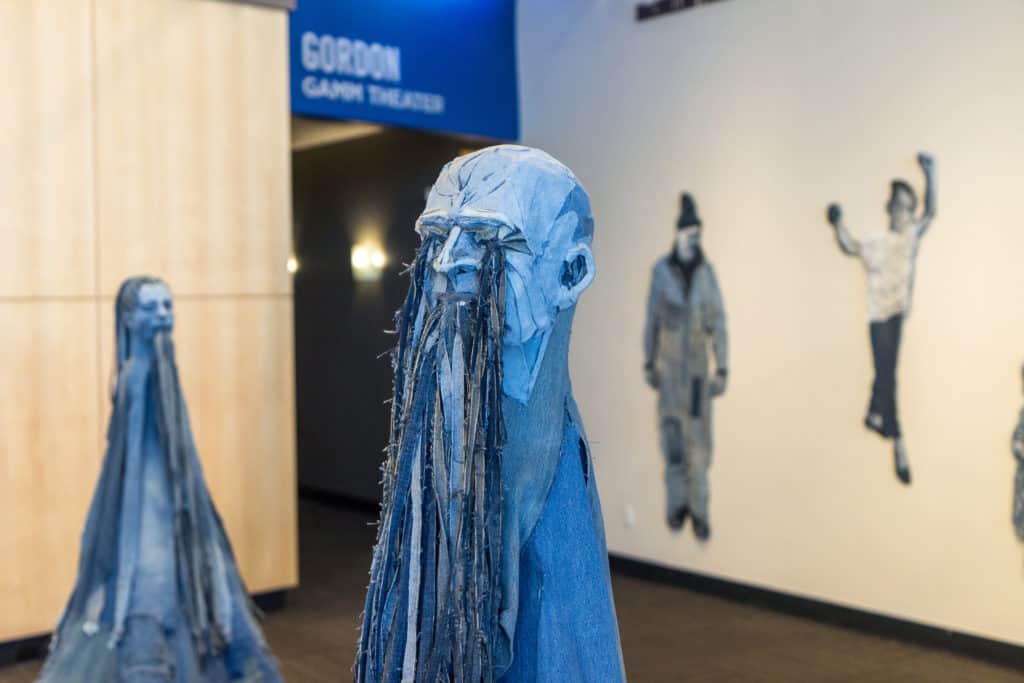 When I was young, I remember my father sitting at the sewing machine patching his Wranglers in the evening after work. The farm crisis had reached our place near Flint, MI and he was making do: A concept of thrift and pragmatism that dictates you work with the materials at hand. That memory mixed with the stories of other working people, leading me to denim as a material. It is a universal fabric born in the dust of the cotton field, made supple by the sweat of garment workers, and embedded with the fading of second shift evenings. Its qualities amplified my own ideas about materials and class, providing stronger coupling between content and form.

“Fix’n things up” prolongs their worth and I still find some life in the materials, methods, and motivations of those I grew up with. Although separated by distance and time, the people I come from reemerge in my studio to remind me of our shared struggles and resilience. I still sew at my mom’s Kenmore, patching-up and manufacturing relationships with people I know and care about. I spend far too much time oiling the aging fleet of industrial machines that find refuge in my garage studio, squinting at hasty sketches executed on the drywall, and wondering how to assemble them into patterns of meaning. Yet I couldn’t do my work without my co-conspirators who bring short stacks of jeans and their stories to my endeavor; some hand-delivered neatly-folded, others jostled from far corners of the country in cardboard boxes, all greatly appreciated.

Jim Arendt is an Associate Professor of Visual Arts and Gallery Director at Coastal Carolina University. He received his BFA from Kendall College of Art & Design and his MFA from the University of South Carolina. He has participated in residency programs including The Fields Project in Illinois, Arrowmont’s Tactility Forum, and From Waste to Art VI in Baku, Azerbaijan. He’s been invited to teach at Penland School of Craft and Arrowmont School of Arts and Crafts. His work is exhibited internationally in numerous group and solo shows.

Recently, Arendt received First Prize during Fiberarts International 2019, was short-listed for The 1858 Prize for Contemporary Southern Art and a 2018 finalist for the Elizabeth R. Raphael Founder’s Prize, Society for Contemporary Craft, Pittsburgh, PA. He has received the South Carolina Arts Commission Visual Artist Fellowship 2014 and his work received the $50,000 top prize at ArtFields 2013. His work was chosen for the 2013 Museum Rijswijk Textile Biennial, Netherlands, and he has work included in the Arkansas Art Center’s permanent collection of contemporary craft. He has juried numerous local, regional, and national exhibitions in support of the arts across the country.

My work addresses the vital and fleeting qualities of human contact. It investigates the possibility of immortality, the commemoration of touch, and the thresholds between people. It questions the fragility and resilience of both the human body and our connections to each other.

Often those offered the most protection are not the most vulnerable. What kind of protective gear should one wear to a night club, a church, a concert, a school? Imminent Peril – Queer Collection is an ongoing series of fashionable safety vests created with bullet-proof Kevlar material in response to the 2016 Pulse nightclub shooting. They are specifically tailored and designed to protect my queer-identified friends, lovers, mentors, and artists I admire, reflecting their individual ideas around personal safety and style. This new work it is rooted in a desire to promote awareness about the safety of LGBTQ people, but it recognizes the need for all people to feel safe while expressing their individuality. These garments address the vulnerability and self- preservation negotiated during human interaction.

German-born and the daughter of two ballet dancers, Erika Diamond is a textile focused artist, educator, and curator. She received a BFA in Sculpture from Rhode Island School of Design and an MFA in Fiber from Virginia Commonwealth University. She has exhibited nationally and internationally and her costumes have been commissioned by Charlotte Ballet. Residencies include McColl Center for Visual Art (NC); STARworks (NC); ABK Weaving Center (WI); Platte Forum (CO); and an upcoming STEAM residency at UNC Asheville. She received a Regional Artist Project Grant in 2015 from the Arts & Science Council of NC and a recent Adjunct Faculty Grant from VCU Arts to create new work queering bulletproof Kevlar fabric. Diamond has taught at Virginia Commonwealth University (VA) and Rocky Mountain College of Art and Design (CO), and will be teaching at Penland next Spring. She is currently the Administrator for The Furniture Society and spends her summers as Assistant Director of Galleries at Chautauqua Institution (NY).

ANNA: A Unique Exhibit Exploring the Life and the Art of Anna Pavlova 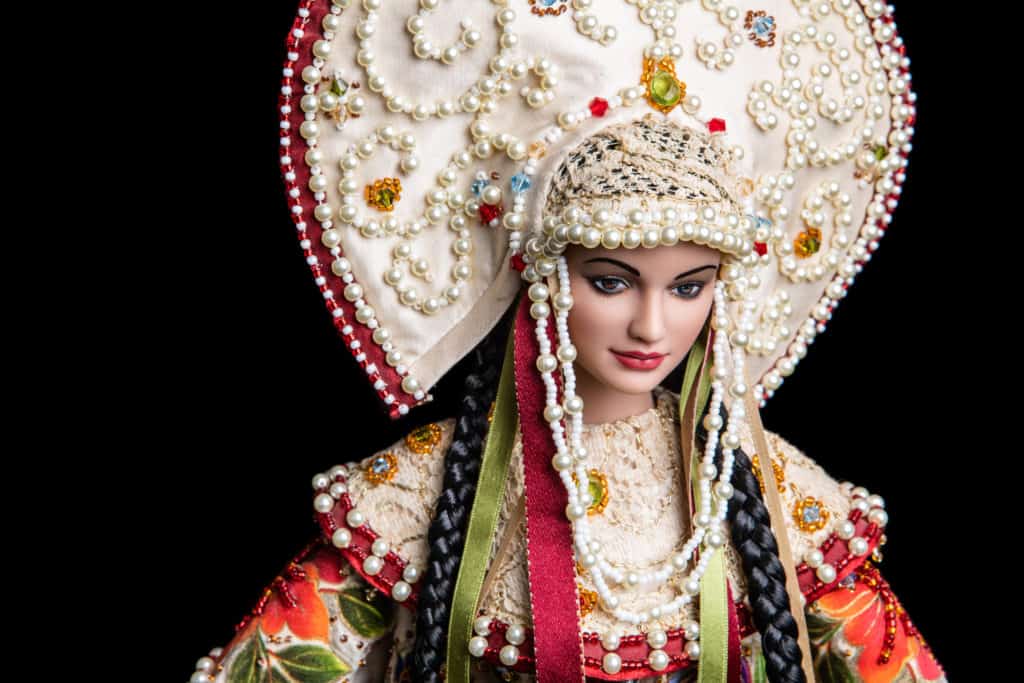 For the past eight years, Turchette has researched and meticulously recreated in one-quarter scale the costumes and couture of Anna Pavlova. It is her way as an artist to bring to new audiences the remarkable story of this courageous and spirited woman.

Anna Pavlova (Russian, 1881-1931) was a gifted ballerina and enterprising businesswoman who established and supported her own ballet company. For two extraordinary decades in the early 20th century she and her troupe crisscrossed the globe multiple times by steamer ship and locomotive. Air travel was still in the future. In an era when most women were entirely dependent on men and rarely left their own domestic environs, she made it her mission in life to introduce her art form to the entire world. She wholeheartedly embraced peoples of other cultures, believing in the power of dance to overcome ethnic, religious, and political divides. Much like ballet dancers during the USA/Soviet-era cold war, she was an ambassador for a less divisive, more harmonious global perspective. Through her dancing, she connected to her wide variety of audiences in a way both universal and intensely personal. It is often said that people who saw her dance never forgot the experience.

Born in poverty to a single mother in Imperial Russia, at age eight Anna saw The Sleeping Beauty at the Tsar’s Mariinsky Theatre, and the course of her life was indelibly set. Training from age 10 at the Imperial School of Ballet, upon graduation she quickly rose through the ranks to prima ballerina. But world events would change her life forever. World War I and the Russian Revolution forced her to leave her beloved homeland, never to return. As a refugee, the second half of her life was defined by her unceasing travel, dancing to an audience of millions on a global stage. When she died at age 49, the world mourned.

The story of this fiercely independent woman and the ballet company she created serve as a beacon forother girls and women to create a life of personal meaning and public success. Pavlova’s legacy is an invitation for us all to boldly do the same with our own art and lives. It is Turchette’s hope that through this exhibit people will come to know Anna Pavlova as both an artist and as a woman, whose unconventional life, unflinching dedication to her art, and spirit of inclusivity still resonate with and delight us today.

Peggy Turchette grew up in an academic family in a small suburb outside of Boston, MA. Midway through adulthood she switched gears from secretarial work to attend the Evening Division of the New England School of Art & Design, specializing in fine art and illustration. Turchette left her “day job” in 1991 and worked as a freelance illustrator, supplementing her art income with dog walking. In 2003 she moved to Boulder, Colorado.
She continued her freelancing while attending the School of Botanical Arts & Illustration at the Denver Botanic Gardens, receiving a degree with honors in 2007. In 2010, family responsibilities necessitated the closure of her illustration studio, and she returned to dog-walking as her income source. During this challenging time, Turchette knew she needed a creative outlet free from the assignments and deadlines of the illustration world. She mused upon her three childhood passions: sewing, dolls, and ballet. Stumbling upon Dame Margot Fonteyn’s biography of Anna Pavlova, the most beloved ballerina of her day, Turchette became enchanted with the extraordinary story behind this dancer and knew that she wanted to learn more about Pavlova’s life and share this with others.

For more on the Pavlova Project: