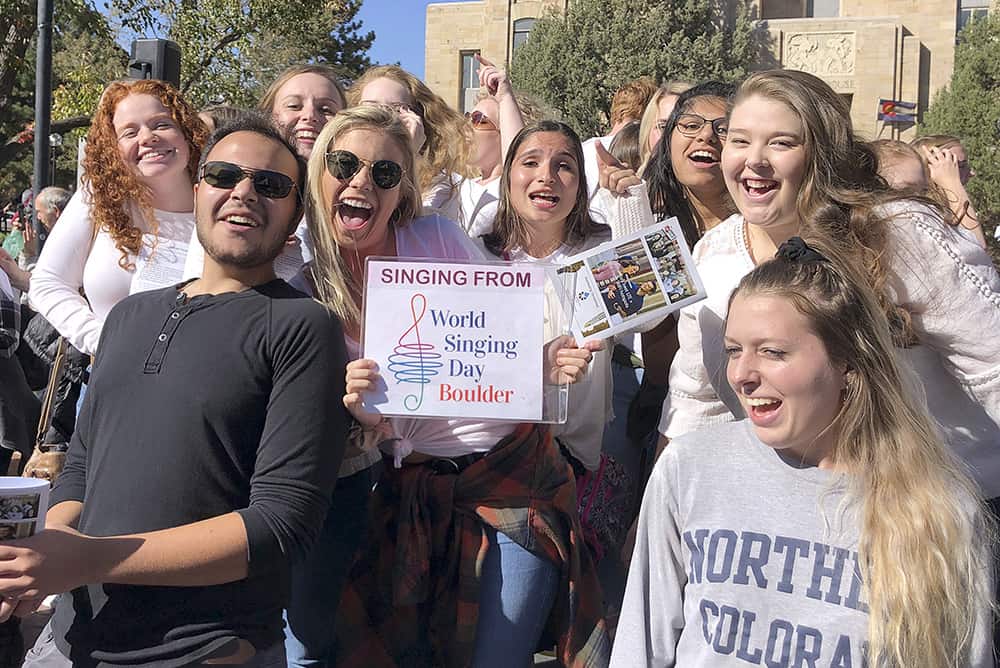 Some people are confident singers. They grew up in households where parents and siblings sang out loud, with music always in the air. Many of the rest of us are shy about singing. It doesn’t mean we don’t have good singing voices. It’s just that we never really learned to sing in front of other people.

So, you can imagine my horror when, two years ago, having never publicly sung out loud, I was asked to be the co-emcee of World Singing Day, leading a thousand people in the singing of two dozen songs on the Pearl Street Mall. Let me just say that I had one or two glasses of courage before the event.

The thing is, it was wonderful. Everyone there was belting out the tunes and having a great time. There were good singers and some who were challenged to carry a tune. There were pros and amateurs. There were seniors and kids. There were singles and groups. Some people planned to come to the event. Others just came across it as they strolled up Pearl Street.

But, for that beautiful 90 minutes, 1,000 people all did the same thing together. We sang favorites that everyone knew, from the Beatles to John Denver, Bruno Mars, and the Indigo Girls. It didn’t matter what we sounded like. The music was loud and the sun was shining. It was a giant group karaoke. And, what made it all the more special was knowing that thousands of other people around the world, in dozens of cities in countries as far-flung as New Zealand, South Africa, Portugal, and Brazil, were all doing the same thing that day.

That’s World Singing Day. It’s the creation of an energetic and earnest guy named Scott Johnson. Scott is a professional musician and songwriter who has travelled the world. But, after he settled in Boulder, he had a vision for a single day, once a year, when people across the planet would come together in their respective city centers and town squares and sing songs that are popular in their cultures, with one song in common worldwide that everyone would sing.

So, in 2012, Scott looked at an international calendar and concluded that the time with the fewest conflicts was the third week in October. It really wasn’t a public event at first. “The first year, I just called up some of my musician friends around the world and asked them to sing in their respective places on a Saturday in mid-October,” Scott recounts. “In addition to their local songs, I asked them all to sing ‘A Little Help From My Friends.’ Thus was born the World Singing Day and the Song of the Year.”

The non-public singing days were repeated in October 2013 and 2014. But, then Scott decided to go big. He launched the first public World Singing Day in Boulder in October 2015, on the Pearl Street Mall. To Scott’s surprise, 500 people showed up.

Scott explains that he wanted to get people singing together to build stronger connections. “It’s a way for all of us to connect with that wiser, more joyful part of ourselves,” Scott says. “It’s like global group therapy. It’s so touching. It’s so joyful. I love singing and bringing people together in this way.”

Over the next four years, the gathering grew, topping 1,000 in Boulder in 2019, the year I first emceed World Singing Day and actually sang in public. That day, thousands of people in dozens of cities and towns around the world sang local favorites, as well as that year’s international song of the year, “Twist and Shout.” Here in Boulder, my favorite that year was “What a Wonderful World.”

Little did we know on that sunny Saturday afternoon in October 2019 that our world was about to become a little bit less wonderful. Like so many great gatherings of people, the inperson World Singing Day in 2020 was cancelled and moved online, a victim of the pandemic.

But, like so many great gatherings of people, World Singing Day will not be deterred. It is back this year, on October 16, albeit with a bit more social distancing. To allow for more space, the communal singing this year will take place at the Bandshell at Central Park, starting at 1:00. And, as Boulder recovers and reinstitutes great traditions, so does the world, with dozens of parallel singing events happening on October 16 in cities around the world from Australia to Asia to Africa to Europe. This year’s international song of the year will be “Here Comes the Sun.” Appropriately optimistic, given all we’ve been through the last two years.

I’ll be co-emcee again this year, joined by my friend Melissa Fathman, the executive director of the Dairy Arts Center, who is fun and who has a beautiful singing voice. We’ll be supported by great sponsors, including the City of Boulder, Downtown Boulder Partnership, the CU College of Music, Parlando School of Musical Arts, and the Library and Parks foundations. If you don’t remember all of the words to the two dozen songs we’ll be singing together, don’t worry. Everyone will get a free song booklet with lyrics.

Scott’s long-term plans for World Singing Day are far from modest. “I envision millions of people singing together each year on World Singing Day in the spirit of our common humanity,” he says boldly. “I see this becoming an international celebration, like Earth Day, where people are singing on the same day in all 196 countries around the world. Why not give it a try? If nothing else, it’s pure joy.”

If you’re a shy singer, like me, World Singing Day is the perfect place to make your public debut. “You’re exactly the person who should come to this,” Scott says of us bashful singers. “It doesn’t matter what you sound like. We’re all singing together. We turn up the speakers loud. You can’t hear any one person singing. You’re just part of this crowd, part of this community, expressing itself in a joyful way.”