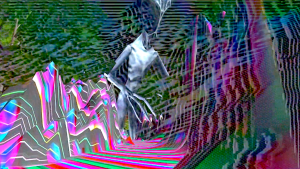 Brutal Realities: An exploration of alternate and real-life hard to believe realities.

OPENING RECEPTION & PERFORMANCE:
Brutal Realities will open on Friday, Jan. 17th at 5:00pm. At 6:00pm a brief introduction and discussion of the works on view will be made.The reception is an opportunity to meet and mingle with the artists and curators. Light fare for attendees, plus drinks available for purchase. All receptions are free and open to the public.

A special live audio/visual performance from exhibiting and visiting artists will be presented in the Carsen Theater from 7:30 – 8:30pm. Click here for more information and to register.

Co-curated by Drew Austin and Mark Amerika, Brutal Realities exposes how contemporary artists confront their shifting nature of reality in digitally mediated culture. This manifests through various artistic mediums but focuses on artists working in the field of new media art. Presented primarily through video, sound, animation, photography, performance, and digital manipulation, the exhibition features artists who have shown their work nationally and internationally, all of whom have developed their work while living in Colorado.

Each artist in the exhibition brings their unique style of manipulating data to form a different approach toward the precarious cultural and political situation we find ourselves in. Some of the artists choose to use humor and post-internet parody to send a direct message, while others use abstraction, movement, and color to evoke an emotion or line of inquiry. Throughout the exhibition, viewers get critical insights into a world mediated through technology. Brutal Realities invites you to question the world around you and rethink what it means to be alive at a time of global climate crisis, cross-generational existential angst, and information overload.

VidKidz is a collaboration between Melanie Clemmons and Zak Loyd. We have worked together since 2009, composing immersive video installations, developing net.art pieces, and providing visual support for live music across USA/URL landscapes.

Melanie Clemmons is a new media artist interested in the effects of technology on society, culture, animals, & the environment. She makes videos, net art, installations, & VR experiences. Clemmons toured with Pussy Riot performing visuals during their first North American tour & has collaborated on several of their music videos. Her work has been shown at, among others: HeK, the Whitney Museum of American Art, Gene Siskel Film Center, & Echo Park Film Center. She is an assistant professor at SMU in Dallas, TX.

Zak Loyd is a multimedia artist and educator interested in the mystical ramifications of archaic and contemporary video technologies. His intermodal work takes the form of installation, performance, and network-based compositions. He has shown at The Museum of Contemporary Art, Denver; Rhizome at The New Museum; and Casa Maauad, Mexico D.F. He is currently a Visual Art Technician and Adjunct Faculty in New Media Art at the University of North Texas.

Soul Tangler is a mundane noise conspiracy, currently residing in the sticky parts of earth. (via Always Human Tapes)

Sasha De Koninck is an artist and researcher from Santa Monica, CA. Her work is a presentation of a multisensory experience, through the research and development of smart textile material for the body that is intimate, sensitive and loud. Her objects respond with screeching sounds and mystifying notations. The tools used to compose a song are the same as the tools used to create a weaving- notations, grids, zeros and ones. New sequences are created which reveal an inseparable relationship between motion and sound. Her objects respond with screeching sounds and mystifying notations. Sasha received her BFA in 2013 from the Maryland Institute College of Art, and an MFA from the School of the Art Institute of Chicago in 2015. Currently, she is a PhD candidate in Intermedia Art, Writing and Performance at the University of Colorado, Boulder.

Brad Gallagher‘s practice revolves around writing, coding, sound and new media with a focus on how computation intersects these different mediums. He has had a lifelong interest in how simple rules give rise to complex behavior, how order arises from chaos and how systems with many interacting parts exhibit self-organization. As an artist he draws inspiration from and directly leverages these principles to create interactive, dynamic, and emergent content. He reflects these practices back into traditional writing, creating a feedback loop of influence amongst the mediums of his work. He graduated with a BFAW from the School of The Art Institute of Chicago in May 2019. His piece “dosamonoyatoya” explores the boundary waters between sound/music, non-verbal utterance/speech, and image/noise. A loop of live sound is built using mouth harps, voice, and throat singing. As the sound loop accumulates the different tones and voices trigger different generative video models that were trained using neural networks. Each performance creates a unique sound loop that in turn triggers a unique generative video.

Sean Winters & Kevin Sweet are frequent collaborators producing and performing interactive works using emergent technologies to reambiguate the ‘obvious’. Their last performance Anything on this Earth was a live audiovisual exploration ruminating on parallax and jazz by feeding multichannel audio signals through hacked video circuits to an anaglyphic 3D projection.

Sean Winters is a sound-artist, composer, and audiovisual performer whose worked extensively in venues, concert halls, and art galleries along the front range. Highlights include a projection-mapped ReSmash of Richard Wagner’s infamous opera Tristan & Isolde at BMOCA and GOCA121, as well as performing with the Playground Ensemble at the Leon Gallery during the premiere of his recent work Textures for chamber ensemble, live electronics, and live video.

Kevin Sweet is a visual artist whose practice revolves around questions of memory, performance and play. Prior to relocating to Colorado, he was Technical Director & Animator for the intermedia performance Twinsome Minds (premiered at the Abbey Theatre, Dublin) and collaborator on JoyceStick, a VR adaptation of James Joyce’s Ulysses (exhibited at the James Joyce Centre, Dublin).