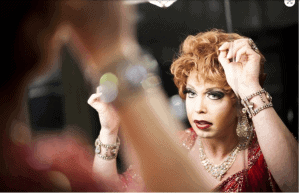 – Jeffrey Kash jokes that you can just as easily invite your enemies to catch a performance of his on-stage persona, Mrs. Eda Bagel, as you can your friends, and you’d be doing both of them a favor.

Of his latest show, Mrs. Eda Bagel… In Concert With Herself!, Kash says that if you’re looking for a night of highbrow humor and a real cultural experience, you should probably go somewhere else.

Kash created Mrs. Bagel — a “Glamazon housewife” who keeps her kitchen cabinets stocked with shoes — after catching a bad drag show at a Pittsburgh gay bar shortly after coming out as a gay man in 1996. Incensed by the lame Top 40 songs being lip-synced on stage, he asked the booker if he could return and do his own night.

The booker asked Kash what his stage name would be, and Kash replied, “I’ll have to think about it.” Two weeks later, he came back with his own lights, programs and the auburn-haired character he would perform for the next two-plus decades: Mrs. Eda Bagel.

“I’m not saying it was better or that my style was better at that point,” says Kash, who majored in musical theater at the University of South Dakota and lives in Boulder.  “It’s certainly augmented itself over the years. I’ve been traveling the country long enough to know I’m the only one who does what I do. It’s an interactive musical monologue.”

While Mrs. Bagel, who is inspired in part by comedians like Carol Burnett and Lily Tomlin, sprang from a drag show, Kash doesn’t consider his performance to be drag; it’s musical theater. In a typical show, he will lip-sync to uncommon songs from the 1940s, 1950s and 1960s by singers like Marilyn Maye and Ruth Wallis. Most people will not be familiar with the songs, or at least the versions and arrangements Kash chooses. He also tells self-deprecating jokes and at least once or twice brings up the house lights to take questions from the audience. His show is heavy on improvisation, and he carries a thumb drive of fifty or sixty songs from which he will select fifteen or so to give to the DJ.

“It’s become a pretty seamless musical monologue,” he says. “Some of it’s standard shtick. Some of it I look at what’s going on in the world or what’s going on locally where I’m traveling for a show. I try to pick songs that kind of tell a story, and the story writes itself in between.”

Although he doesn’t consider Mrs. Eda Bagel performances to be drag shows — he jokes that he is a “Gender Illusion Technician” — Kash still sees drag as an ambassador of sorts between the gay and straight communities. However, the majority of his audience is not a part of the LGBTQ community.

“This is a way of me coming home for the first time being on that board and doing a fundraiser specifically for them,” he says. “All of the shows I’ve done in that space [roughly fifteen] have been for other charities. I think that’s a special aspect of it.”

The space at the Dairy Center is small and holds seventy or eighty people, so he expects this show to be more intimate than usual. “It’s going to be a little more interactive,” he says. “I’ll be riffing back and forth with the audience rather than doing a lot of choreography. Basically, I’ll be on a bar stool with a martini glass in my hand, lip-syncing and telling jokes. I keep saying the word ‘intimate,’ because that’s really what it is.”

Mrs. Eda Bagel… In Concert With Herself!, 7:30 p.m. Friday, January 10, and Saturday, January 11, at the Dairy Arts Center, 2590 Walnut Street in Boulder. Tickets are $20 and available at tickets.thedairy.org.