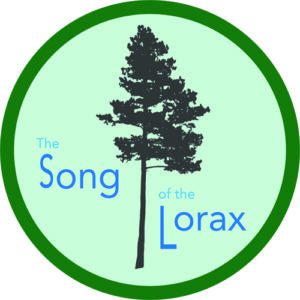 The Song of the Lorax, an immersive, multi-media show centered around a new string quartet by Boulder composer Jeffrey Nytch, will have its World Premiere at the Dairy Arts Center’s Carsen Theatre Nov. 26 & 27, 2021. The show, which features live music, a sound installation, spoken word, and visual images, aims to raise awareness of the destructive impact of deforestation and motivate action to combat it.
The original impetus for the show came from a news report Nytch came across four years ago detailing the plight of “Big Lonely Doug,” a 1,000 year old Douglas Fir on Vancouver Island, BC, where logging of old growth is an ongoing activity. Spared by the loggers’ saw more or less by accident, Big Lonely Doug now stands alone amidst a vast wasteland of clear-cut forest: a potent symbol of the quickly dwindling wonders of some of the earth’s oldest trees still subject to commercial logging. A self-described “tree-hugger” since youth, when Nytch saw the article he knew he had to create a piece of music. “Deforestation of old growth forests, especially in places like the Amazon, has been something I’ve been passionate about for a long time. But I couldn’t figure out how I, as an artist, could do anything to address the problem. When I heard about Big Lonely Doug I immediately knew that was the angle I would take with my music: I would try to look at this from Doug’s perspective, to try to imagine the depths of time his life represents, the joy of those times before humans showed up and the terror experienced when they did.” Though the piece is titled after Dr. Seuss’s iconic book, “The Lorax,” Nytch stresses that this is not a children’s show. “Deforestation is an ugly business, and while I hope the end result of this show is a feeling of hope and an urge to take action, I felt it was necessary to look at that destruction with open eyes.”
With sound design by Nathan Hall, photographs by Canadian photographer T.J. Watt (whose photographs of Big Lonely Doug caught the world’s attention), and a spoken word piece of pre-recorded interviews depicting individuals’ feelings and recollections about trees, the show is much more than a concert piece; “It’s the most ambitious thing I’ve ever undertaken,” says Nytch. The music will be performed by the Ivalas String Quartet, currently in-residence with the Grammy-winning Takács Quartet at CU’s College of Music. “I’m extremely excited to be working with this extraordinary group of young musicians,” said Nytch. “The passion they bring to this is inspiring.”
The show will be immediately followed by an informational session led by experts on the topic of deforestation and climate change. “It was important to me to do more than just sound the alarm, and especially not to leave the audience with a feeling of despair or helplessness. I want to inspire people to get informed and take action. After all: we’re all in this together.”
The Song of the Lorax will play at the Dairy Arts Center’s Carsen Theatre Nov. 26 & 27. The Saturday matinée will offer discounted tickets to students. All proceeds from the show will benefit the Ancient Forest Alliance, which advocates for the end of commercial logging of old growth forests. For more information, visit www.thedairy.org or call 303-444-7328.

1 thought on “The Song of the Lorax – World Premiere”