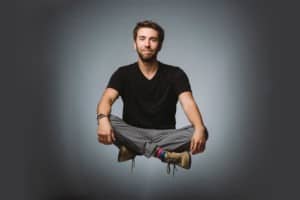 BUY NOW! Nov. 1 – Our curator and host of Boulder’s only regular magic show, Braden Carlisle, is joined this time with a very special guest, Hayden Childress.  You’ve never seen a magician like Hayden!
Hayden is an award-winning magician who has performed for organizations nationwide such as Lowe’s and Bank of America and has been gaining popularity for his original and fast-paced magic show. Hayden also recently completed a TED talk on interactive performance.

Hayden’s show is a fun, thought-provoking performance that involves the audience directly with each routine. A few of the original routines include modern magic using borrowed audience member’s smartphones, demonstrations of mentalism (psychological magic), and surprising, unpredictable close-up magic projected on stage.

“Hayden provides a fun, entertaining show that holds your attention throughout the entire evening. The variety of his performance and the skill to which it was executed was captivating and attested to his prowess as a magician and performer.” World Magic Review UK, 2017

ABOUT BRADEN:  Following several sold-out shows, Braden Carlisle will once again amaze and amuse the Boulder crowd.  With styles ranging from mentalism to comedy, the captivating comedy magician will leave you laughing harder than you thought possible at a magic show! As a lover of all things magic, Braden is also a published author of the magic theory book “Agree to Disagree” and hosts a weekly magic podcast titled “Awesome People Talking”.