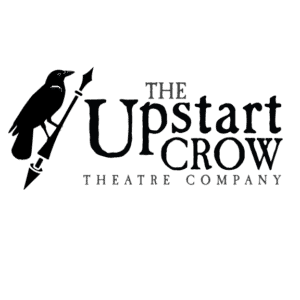 THIS PERFORMANCE HAS BEEN CANCELED. PLEASE JOIN US FOR A ONE NIGHT ONLY PERFORMANCE WEDNESDAY FEBRUARY 2 More Info Here

At the end of Shakespeare’s play Love’s Labour’s Lost, four pairs of lovers are separated by the news of the King of France’s death. The Princess of France and her ladies return home; the King of Navarre and his friends vow to be faithful for a year.

If Shakespeare ever wrote the sequel, it hasn’t survived the ravages of time. But The Upstart Crow is happy to announce the next best thing: the world premiere of Katherine Dubois’s play Love’s Labor’s Won, which takes up the action after that year has passed. There’s no attempt to copy Shakespeare’s style (except for the bad puns), but most of the characters are back.
The Princess and her ladies are returning to Navarre. Is everyone still in love? It couldn’t be that easy, could it?
In the meantime, the curate and schoolmaster have discovered an old manuscript. They’re convinced it’s Sophocles’ lost tragedy Amphitryon.

Armado and his page Moth are still at the court of Navarre. Armado’s sweetheart has run away; he pines.
Complications include an escaped bear, a tumble into the moat, a mis-delivered letter, wearing of masks, breaking of engagements, plenty of misunderstandings, and the least funny riddle in the universe. Oh, and also the premiere of (possibly) Sophocles’ lost tragedy Amphitryon.