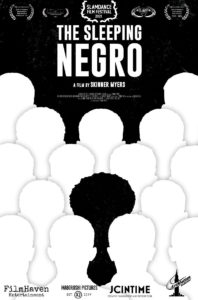 TicketsFeb 22-27 – The Sleeping Negro opens with James Baldwin’s quote “To be a Negro in this country and to be relatively conscious is to be in rage almost all the time”. It tells the story of a young Black man, simply identified as “Man,” who must resolve the personal meaning of his blackness when his white boss orders him to commit fraud to benefit the corporation. Struggling with an overwhelming sense of shame for going through with the illegal demand, Man seeks consolation by discussing his unease with a black former friend and his white fiancé.  This does not go well.

Following on the footstep of the LA Rebellion filmmakers, Skinner Myers tells a very personal and intimate Black story in a radically non-traditional cinematic style as a means to express freely his feelings as a Black man in America (Skinner Myers, 2021, USA, 1:13, NR)

Wednesday, Feb. 23 – Join us for a post-film Q&A with the film maker, Skinner Myers!