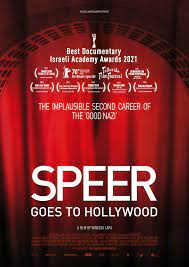 Friday, Nov. 4 – In this shocking cautionary documentary, Hitler’s close ally and chief architect Albert Speer attempts to whitewash his Nazi past through a Hollywood adaptation of his bestselling wartime memoir, “Inside the Third Reich,” with a young English screenwriter as his willing accomplice. How did a man in charge of 12 million slave laborers escape the gallows to become a best-selling author living in luxury? Why would a Hollywood studio consider condoning his actions by telling his version of events? What redeemable qualities did the young screenwriter possibly see in this cultured gentleman with whom he finds such cozy rapport? The only thing more repellant than evil itself may be the person licking evil’s boot, and Israeli director Vanessa Lapa has unearthed an astounding story with not one but two villains.