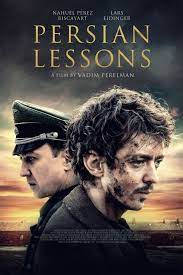 TICKETSSunday, Nov. 6, 2:30 pm – Driven by desperation, an ingenious Jewish concentration camp prisoner from Belgium poses as Iranian to avoid death, pretending to speak and teach Farsi to the eccentric Commandant who holds his life in his hands. The winner of multiple film festival awards, this harrowing tale of survival is tinged with black humor. Featuring powerful performances by the actors playing two men locked in a deadly game, this fable from Ukrainian director Vadim Perelman depicts the evil absurdity at the heart of the Holocaust.