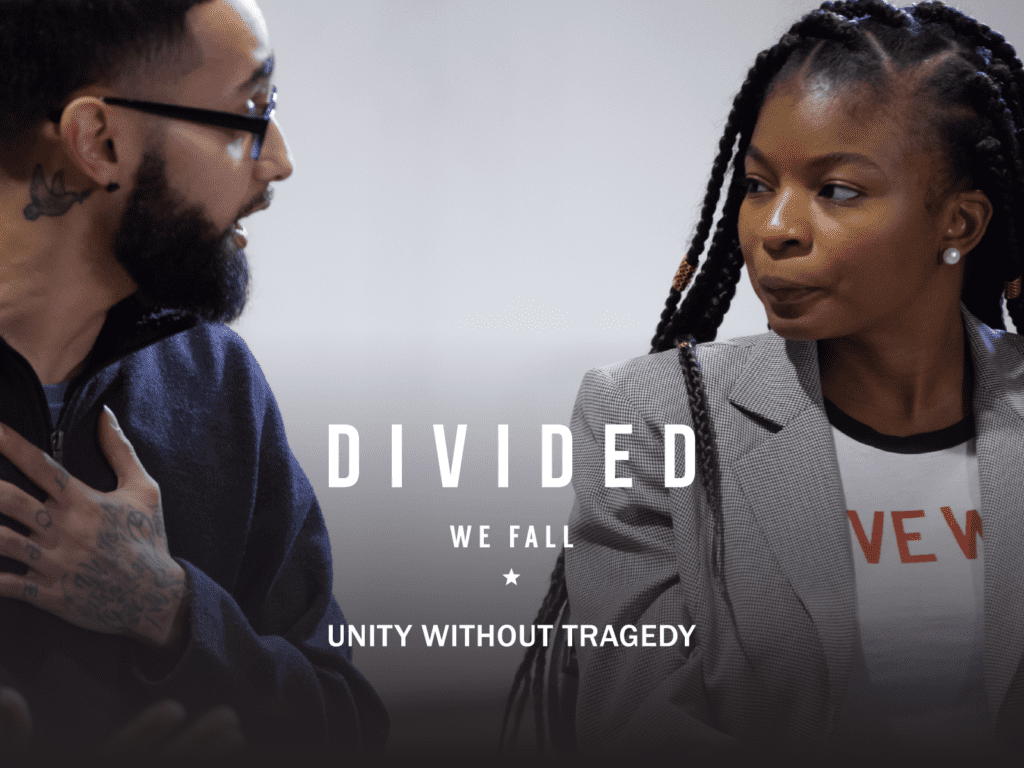 TICKETSFriday, 04/01/22, 7:00 PM – Divided We Fall: Unity Without Tragedy, demonstrates that given the chance, ordinary Americans will “choose unity.”

America’s “culture of contempt” is ruining political discourse and making us miserable. The Divided We Fall film brings together people on the opposite sides of the political divide for a weekend and demonstrates that most Americans want something better than this divisive status quo and are ready to build a better country where we are able to disagree better and love one another, despite our differences.

Motus Theater and New Voice Strategies present the powerful film on bridging divides, Divided We Fall: Unity Without Tragedy. New Voice Strategies proved on camera that despite divisions that are exploited and amplified on social media and cable news, by pundits and politicians, Americans are hungry for connection and unity. They want the core of our democratic experiment–“We the People” to succeed.

Twice, New Voice Strategies filmed strangers from opposite sides of our political divides– Gen Xers from Massachusetts and millennials from Chicago– gathered together for a weekend. Cast members wrestled with what it means to be an
American…our divides, and our connections.

After the 1hr film, experience a panel discussion with you, the audience, and 8 of the film’s cast members. Join in the discussion and reflect on strategies to build a better country as we negotiate political divides.

“America’s “culture of contempt” is ruining political discourse and making us miserable. Divided We Fall demonstrates that most Americans want something better than this divisive status quo and are ready to build a better country where we are able to disagree better and love one another, despite our differences.” –Arthur C. Brooks, author of Love Your Enemies, president emeritus, American Enterprise Institute & Professor of Practice, Harvard Kennedy School and Faculty Fellow, Harvard Business School

“Great piece that demonstrates the conundrum of being human, having opinions, and what happens when we stay long enough to be vulnerable, to listen, and to consider other perspectives.” –Norma Johnson, Poet, Allinspirit.com

“At a time of unprecedented political polarization in our country, I found it so hopeful to see these groups of American citizens come together – younger and older from different parts of the nation – and have the patience and courage to learn and discover together across the divide. We need to scale these examples up immediately.” –Peter Coleman, Professor of Psychology and Education at Columbia University
(Motus Theater’s artistic director Kirsten Wilson was honored to be an advisor for this film.)

Age Guideline:
11 and up