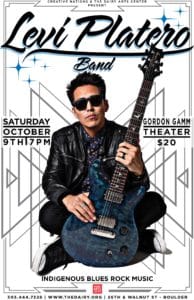 Saturday, October 9th, 2021 – Levi Platero is from the Navajo Nation of the Southwest region of the United States. With his family band “The Plateros” they emerged on the music scene in 2004 as a blues-rock power trio compared to the likes of Stevie Ray Vaughan, Los Lonely Boys, and ZZ Top. After a decade of touring the US with his family band, a 1 year run as a member of the Indigenous blues band, Levi decided it was time to get back to his own music as a solo artist. He then recruited a new band, began touring, and released a self-titled EP featuring the single “Take Me Back” which went on to win the 2016 NMMA for Best Blues. Levi Platero is a great example of a guitar player with a gift of guitar-playing intuition of a much more experienced player. Levi’s quiet nature is unleashed in a style that mixes a spectrum of Texas Blues, vintage rock, to modern guitar heroes such as Eric Johnson and Steve Vai. With a captivating live show, he ranges from flurries of guitar acrobatics all the way down to soulful expressiveness.
+ Google Calendar+ Add to iCalendar