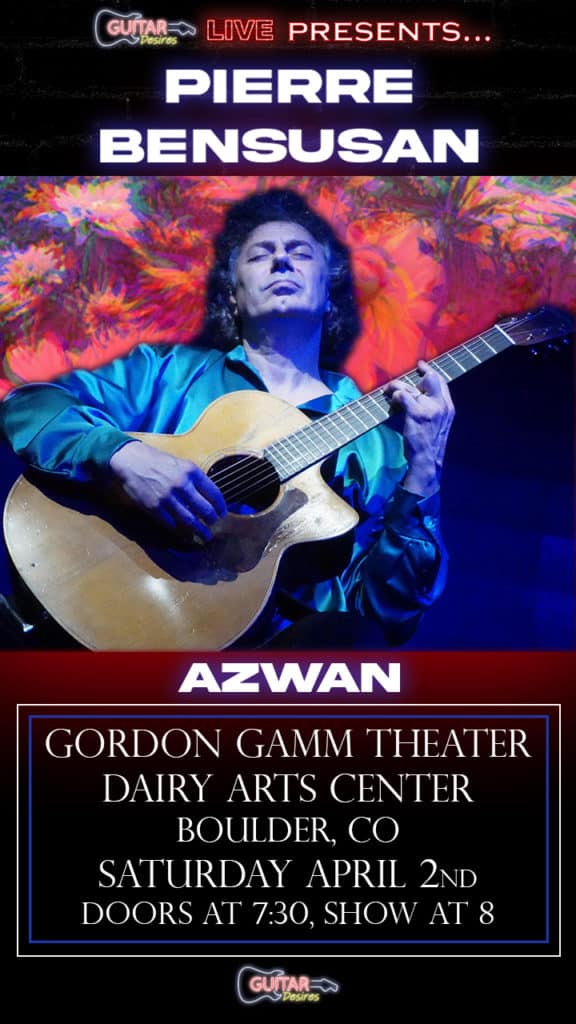 TICKETSSaturday, April 2, 2022 – All the way from Paris France, GuitarDesiresLive is delighted to present an intimate evening with the incomparable Pierre Bensusan presenting his latest recorded revelation, AZWAN. Come join us in Boulder Colorado at the Dairy Center for the Arts Boulder Colorado, Saturday night April 2, 2022. for a night you won’t forget.

Hard to overstate Bensusan’s impact as a guitarist in the ensuing 46 years since he burst on the scene in 1976 and joined Michael Hedges, John Fahey, Leo Kottke, Alex DiGrassi, Local Danny Heines, Bert Jansch, Robby Basho, David Bromberg, John Renbourn, Ralf Illenberger, Phil Keaggy, Mike Marshall, Friedemann, and all the other incredible guitar voices at that time trying to expand upon what Django Reinhardt, Charlie Christian, Chet Atkins, and other fingerstyle pioneers had started.

Described by the L.A. Times as “one of the most unique and brilliant acoustic guitar veterans in the world music scene today”, Pierre’s name became synonymous with contemporary acoustic guitar genius, long before the terms New Age or World Music were invented. He has literally created a style of playing with the ability to make a single guitar sound like an entire band as he brings the audience on a mesmerizing musical journey.

Melodic, romantic, lyrical, and technically astonishing playing is all here in AZWAN and we can expect a unique musical trip as we share a beautiful Boulder spring night with one of the masters of fingerstyle guitar in the world today!