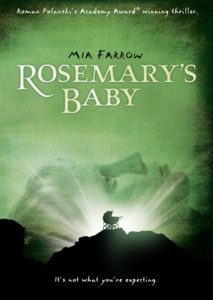 Oct 22 – A young wife comes to believe that her offspring is not of this world. Waifish Rosemary Woodhouse (Mia Farrow) and her struggling actor husband Guy (John Cassavetes) move to a New York City apartment building with an ominous reputation and odd neighbors Roman and Minnie Castavet (Sidney Blackmer, Ruth Gordon). When Rosemary becomes pregnant she becomes increasingly isolated, and the diabolical truth is revealed only after Rosemary gives birth. (Roamn Polanski, 1968, USA, 2:16, R)

This screening is hosted by Bryan Bonner and Jack Hanley of the “They Did It” conspiracy theory podcast as part of Friday Night Weird’s “It’s a Conspiracy” Film Series including BLOW OUT (1981), ROSEMARY’S BABY (1968) and UNDER THS SILVER LAKE (2018).

THIS SCREENING IS VACCINATED ONLY.