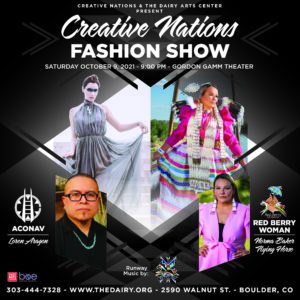 The Indigenous People’s Day Weekend celebration continues with an evening of fashion, curated by Kelley Holmes of Native Max Magazine and featuring Red Berry Woman and Aconav. This event is free and open to the public! 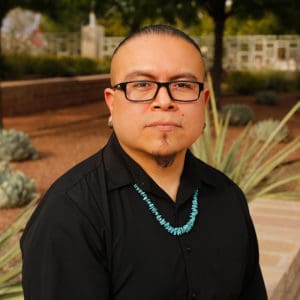 About ACONAV: Loren Aragon is a fashion designer from Acoma Pueblo, New Mexico, and CEO of ACONAV. Aragon’s introduction to the arts at an early age allowed him to maintain a connection to Acoma culture throughout his academic and professional career as a mechanical engineer. Living outside his community led to a number of new experiences as it allowed Aragon to observe a necessity to preserve the culture of his people and inspire future artistic generations. Loren’s work is the result of a combination of artistic vision and technological discipline. The application of traditional and modern ideas has allowed Aragon to discover an avenue to express his artistic talents while preserving culture through fashion design. ACONAV has become a leading Native Fashion brand that celebrates the strength and empowerment of women worldwide. Today, the culturally fueled designs of Aragon continue to gain recognition, creating awareness to the growing popularity of Native Fashion. ACONAV was named 2018 Phoenix Fashion Week Couture Designer of the Year which has escalated Loren’s fashion to new heights. A commissioned gown with Walt Disney World in 2018 and a dress that walked the red carpet at the 2019 Tony Awards are among the highlights of Aragon’s fashion career. www.ACONAV.com | Connect with ACONAV
Facebook | Instagram | Twitter 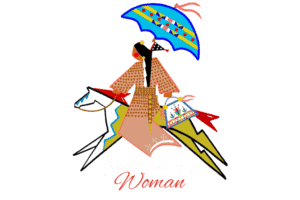 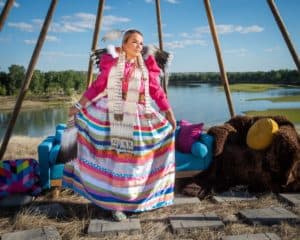 Red Berry Woman, named after Norma’s given Native name, has been seen throughout Indian Country, having been worn by tribal members who represent their Indigenous nations from politicians to pageant contestants, pageant queens, titleholders, to the film and music industries.