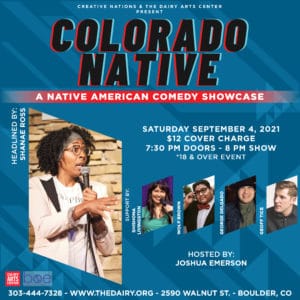 September 4, 2021 – 7:30 pm doors and 8:00 pm Showtime – Creative Nations along with the Dairy Arts Center present their second installment of Colorado Native: A Native American Comedy Showcase. Host Joshua Emerson comes at you with another stellar lineup of Native comics that includes support from Wolf Brown, George Delgado, Geoff Tice and Shishona Livingston. ShaNae Ross will be headlining the show. Originally from Oklahoma, she is now based in Denver, where she was a finalist in the Comedy Works New Faces contest in 2018. Ross says about her comedy “I’m a storyteller but I do provide my observations through things or just how I see them,” she said. “My comedy is very odd, but it’s very me.”
+ Google Calendar+ Add to iCalendar

Age Guideline:
17 and over