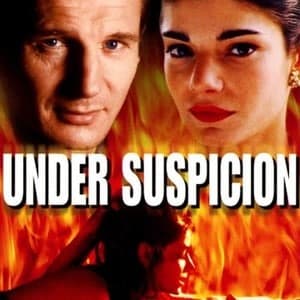 Wed., May 18 – Guest composer Christopher Gunning will introduce the film and talk about his score via zoom. “Under Suspicion” stars Laura San Giacomo and Liam Neeson who won best actor at the 1992 Festival du Film Policier de Cognac for his performance.

In the late 1950s, British police officer Tony Aaron (Liam Neeson) resigns from the force after sleeping with Hazel (Maggie O’Neill), wife of the man whose house he was supposed to guard. In his new job as a fake private investigator, he helps couples get divorces by photographing Hazel having “affairs” with the husband. When she is murdered during a job, Tony begins having an affair with the dead man’s mistress, Angeline (Laura San Giacomo), while trying to prove his innocence.