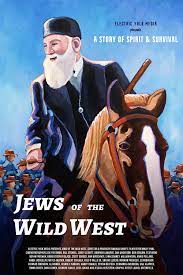 TICKETS – Jews of the Wild West TICKETS – Adventures of a Mathematician

Note Closing Night Double Feature: One film is $30, if you add tickets to both films in your cart the discount for two films will automatically apply.

Sunday, Nov. 13, 3:30 pm in the Gordon Gamm Theater
Director Amanda Kinsey and Leadville historian and preservationist Bill Korn will join us for a Q&A and the post-screening reception. Denver filmmaker Amanda Kinsey has created a fascinating documentary highlighting the contributions of dynamic Jewish Americans who helped tame the West, including numerous Colorado pioneers. From Wyatt Earp’s Jewish wife to the Denver family that founded Samsonite and the creator of blue jeans whose name lives on when anyone dons a pair of Levis, this revelatory foray into Jewish history covers a wide gamut of accomplishments that will surprise most viewers. Did you know that by the end of the 19th century, nearly every notorious town in the Wild West had a Jewish mayor? By illuminating an unfamiliar chapter in the Jewish immigration story, Kinsey changes our perception of the American West.

OLD WEST-THEMED RECEPTION 5:30-6:30 IN THE DAIRY LOBBY
Join us after Jews of the Wild West and before Adventures of a Mathematician for Cowboy chile and cornbread, and homestyle pie and cider. Music by Greg Schochet and Little America.