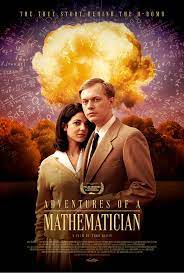 TICKETS – Jews of the Wild West TICKETS – Adventures of a Mathematician

Note Closing Night Double Feature: One film is $30, if you add tickets to both films in your cart the discount for two films will automatically apply.

Sunday, Nov. 13, 6:30 pm – Based on the autobiography of the same title, this riveting biodrama recounts the eventful life of mathematician Stam Ulam. A Polish Jewish refugee, Ulam was a key player at Los Alamos, where he helped to develop the hydrogen bomb and create the first computer. Later, he taught at CU Boulder. An intriguing behind-the-scenes look at Los Alamos, where a group of mostly European Jews were locked in a scientific battle with Nazis and later Communists, this warmhearted, well-acted personal drama also serves as prelude to “Oppenheimer,” Christopher Nolan’s biopic focused on Ulam’s famous boss due out in 2023.

OLD WEST THEMED RECEPTION 5:30-6:30 IN THE DAIRY LOBBY
Join us after Jews of the Wild West and before Adventures of a Mathematician for Cowboy chile and cornbread, and homestyle pie and cider. Music by Greg Schochet and Little America.