Brazilian Choro with Ian Coury and Cesar Garabini: A dance between the 10-string mandolin and the 7-string guitar 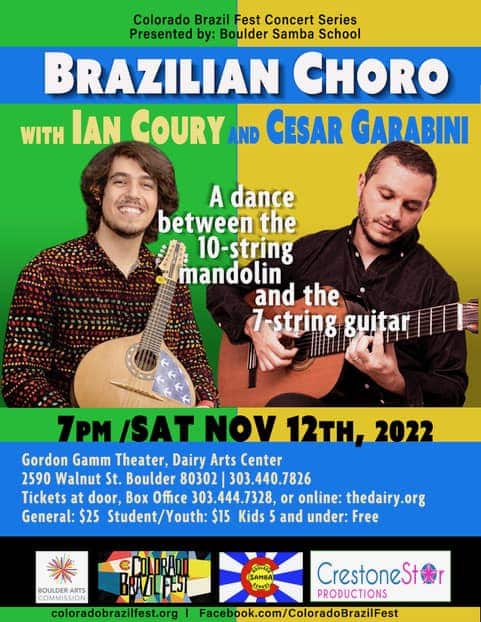 Choro—the “New Orleans Jazz of Brazil”—emerged in Rio De Janeiro, Brazil in the 1890s as an infectious mix of European classical music and African rhythms. It is the historical precedent to Samba and Bossa Nova. In Portuguese, “choro” means “cry” or “lament.” Although some choro compositions are sentimental and melancholy, many others are lively and celebratory with contagious beats and memorable melodies. You might find the unique combination of classical and highly syncopated percussion sounds irresistible and start moving your body or even dancing half way through a song!

In this Colorado Brazil Fest Concert Series performance, you will hear traditional choro pieces as well as original compositions by two extremely talented Brazilian musicians: Ian Coury on the Brazilian mandolin (“bandolim” in Portuguese) and Cesar Garabini on guitar. It is worth noting that the Brazilian mandolin is usually an 8-string instrument and yet Ian plays a 10-string version. Cesar plays the Brazilian 7-string guitar—one more (bass) string than the 6-string classical guitar. These virtuosic artists promise an evening of musical adventure that simultaneously challenges your ears, brains and brings you joy.

Ian Coury
https://iancoury.com/
Growing up in Brazil’s capital city Brasília, Ian Coury began playing Brazilian mandolin (bandolim) at age 8, studying with Marcelo Lima at the Raphael Rabello School of Choro. Having shared a stage with Brazilian choro legends Armandinho and Hamilton de Holanda by the age of 12, Ian Coury has since been accruing professional awards and accolades. At 20 years old, he is already one of Brazil’s most-respected virtuosos of the 10-string mandolin. Ian is currently studying on scholarship at the Berklee College of music in Boston. In his second year, Ian received the String Department Award and taught a choro workshop at Harvard University. He was also on faculty at the 2022 New England Choro Camp. As Ian continues to push the boundaries of the instrument and of the choro genre, he has performed with such luminaries as Paquito D’Rivera, Claudio Roditi, and Toninho Horta, and in the past two years has received two important awards: “Best Instrumentalist” in the National FM Radio Festival (2020), and second place (by popular vote) in Brazil’s eFestival (2021), both for performances of original compositions.

Cesar Garabini
http://cesargarabini.weebly.com/
Originally from Minas Gerais, Brazil, Cesar Garabini is in demand internationally as a virtuoso 7-string guitarist. He especially loves Choro, but is equally at home with Samba, Bossa Nova, Jazz and Portuguese Fado. He has performed at Jazz at Lincoln Center, the Jazz Standard, Birdland, Columbia University, and the Herbst Theater. He has shared the stage with Leny Andrade, Marcos Sacramento, Badi Assad, Anat Cohen, Olli Soikkeli and Douglas Lora and has been featured on NPR, NBC and Global TV in Brazil. Cesar hosts a monthly Roda with the Choro group Regional de New York and is faculty at Choro Camp New England.

Age Guideline:
Free for kids 5 and under