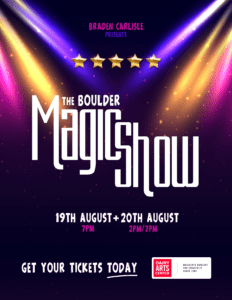 8/19-8/20 – The Boulder Magic Show is back and we can’t wait to astonish and amaze you with this month’s performers!

Kyle Littleton is an Atlanta-based magician, who’s known for his absurd and comedic style and is regarded as one of the most creative magicians of his generation. Genii Magazine, the world’s largest magic periodical, has featured him on numerous occasions for tricks he has developed reflecting his unique approach to magic. Littleton also performs and lectures across the globe for his contemporaries. Kyle has recently appeared on Penn and Teller’s hit TV show, “Fool Us,” and performed at the world-famous, Magic Castle in Hollywood, California.

As always, the Boulder Magic Show at the Dairy is hosted and curated by our own Braden Carlisle. Braden Carlisle continues to curate the best magic. Braden Carlisle returns to the Boulder Magic Show all the way from California where he works with the largest magic company in the US to create magic used by the world’s top magicians. Far from the tackiness often associated with magicians* Braden will leave you laughing harder than you thought possible at a magic show! As a lover of all things magic, Braden is also a published author of the magic theory book “Agree to Disagree” and hosts a weekly magic podcast titled “Awesome People Talking”.