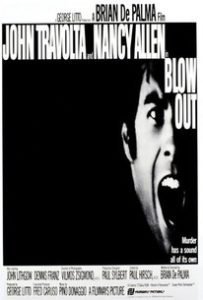 OCTOBER 15, 2021 – Friday Night Weird – Blow Out – While recording sound effects for a slasher flick, Jack Terri (John Travolta) stumbles upon a real-life horror: a car careening off a bridge and into a river. Jack jumps into the water and fishes out Sally (Nancy Allen) from the car, but the other passenger is already dead — a governor intending to run for president. As Jack does some investigating of his tapes, and starts a perilous romance with Sally, he enters a tangled web of conspiracy that might leave him dead.  (Brian De Palma, 1981, USA, 1:48, R)

This screening is hosted by Bryan Bonner and Jack Hanley of the “They Did It” conspiracy theory podcast as part of Friday Night Weird’s “It’s a Conspiracy” Film Series including BLOW OUT (1981), ROSEMARY’S BABY (1968) and UNDER THS SILVER LAKE (2018).

THIS SCREENING IS VACCINATED ONLY.