Ami Dayan in A Tale of a Tiger 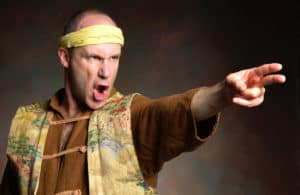 Back Porch Series, Sunday, May 23, 5pm – A Tale of a Tiger is an award-winning Israeli-American adaptation of an Italian Nobel Prize Laureate play, based on an ancient Chinese theatre folk tale, with roots in an Indian myth. A seriously hilarious tale of a soldier who is shot in the Himalayas and left to die. The soldier is saved by a tigress who feeds him of her milk and heals his wounds with her saliva. His life regained, the soldier re-determines the personal and moral standards by which he is to live.

An international hit since 1994, A Tale of a Tiger has played all over the world, including Israel, Colorado, Seattle, Washington DC, The Edinburgh Festival, and recently Off-Broadway NYC at 59E59 Theaters, continually generating outstanding press and audience response. 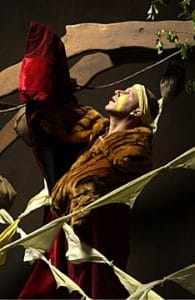 “A Tour de force for versatile Dayan. A parable about the human condition told as a cautionary tale, filled with humor and insight, about the corrupting influence of power and exploitation. Blending charismatic narration and colorful character work he plays everything from a spiritual husker to an operatic tiger, swings like Tarzan, seems serene as Buddha. And like all truth-tellers, he leaves us with a tale that resonates.” The Denver Post