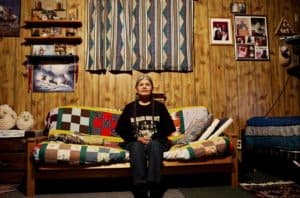 MONDAY OCTOBER 11, 2021 4:30pm & 7:00pm – Amá is a feature length documentary which tells an important and untold story: the abuses committed against Native American women by the United States Government during the 1960’s and 70’s: removed from their families and sent to boarding schools, forced relocation away from their traditional lands and involuntary sterilization.
The result of nine years of painstaking and sensitive work by filmmaker Lorna Tucker, the film features the testimony of many Native Americans, including three remarkable women who tell their stories – Jean Whitehorse, Yvonne Swan, and Charon Aseytoyer – as well as a revealing and rare interview with Dr. Reimart Ravenholt whose population control ideas were the framework for some of the government policies directed at Native American women.
It is estimated over a twenty-year period between 1960 and 1980 that tens of thousands of Native American women were sterilized without their knowledge or consent. Due to poor record-keeping during this era, the number may in fact be much higher. Many of these women went to their graves having suffered this incredible abuse of power.
The film ends with a call to action – to back a campaign to get a formal apology from the American government, which would then open the door for the women to bring forth a lawsuit. This call to action will be supported by an online petition on the film’s website.  (Lorna Tucker, 2018, UK, 1:18, NR)
+ Google Calendar+ Add to iCalendar